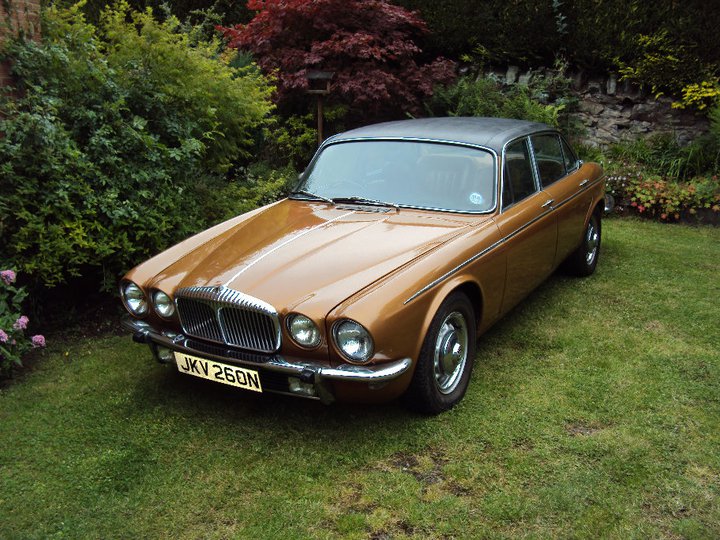 Daimler Sovereign was a name applied by British manufacturer Jaguar Cars to a sequence of luxury cars built by it but carrying the Daimler badge between 1966 and 1983.

The Daimler Sovereigns were based on contemporary Jaguar bodyshells, chassis and engines in an example of badge engineering. Jaguar Cars took over The Daimler Company in 1960 and the 1966 Sovereign was the second Daimler to be based on a Jaguar model. The first was the 2½ litre V8 with an engine designed by Edward Turner. Unlike the Daimler 2½ litre, the Sovereign had a Jaguar engine, marking the end for the Turner designed engines.

The first Daimler Sovereign was based on the 1966 Jaguar 420 and is sometimes referred to as the “Sovereign 420”. Subsequent Sovereigns were derived from the Series I, II and III Jaguar XJ6. In 1983 the model name “Sovereign” was switched to the high specification version of the Series III Jaguar XJ6, the 6-cylinder Daimler based on it simply continuing without a model name.

The V12 versions of the Daimler, available from 1972 to 1997, were named Daimler Double-Six after the original Daimler V12s

From 1972 Jaguar’s 5.3 litre V12 engine was available in the XJ range, and for the Daimler version a name used by the company from 1926 to 1938 was revived. Sir William Lyons had retired from Jaguar in 1972 and the new chairman was FRW (Lofty) England. Lofty England had been a Daimler apprentice from 1927 to 1932 and taken second place in the first ever RAC rally driving a 30/40 hp Daimler Double-Six. So Lofty England decreed that the new V12 Daimler would be known as Double-Six.

Unlike the Jaguar, the twelve-cylinder Daimler had the same radiator grill as its six-cylinder sibling, and externally only the badges distinguished them. The Double-Six followed the same changes as the Sovereign from Series I to Series III, although the Sovereign name was transferred to Jaguar, the Double-Six name remained with Daimler throughout Series III production, which continued until 1992.

A two-door coupé was offered in the Double-Six Series II range from 1975 to 1977, as an addition to the four door saloon. It was marketed as the Daimler Double-Six two door.

When Jaguar re-engineered the XJ40 (the successor to the Series III) to take a 6.0 litre version of the V12 engine, under the model designation XJ81, a new Double-Six was also produced, being manufactured between 1993 and 1994. In the latter year, along with the other XJ models, it was facelifted under the X305 designation and continued to be produced until the V12 engine was dropped in 1997.

View the original brochure for the Double 6 here