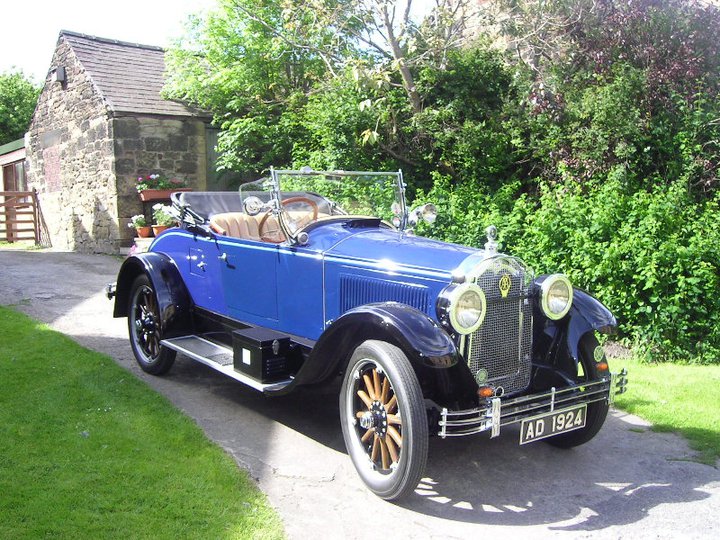 I bought the car whilst on holiday in Perth, Western Australia in 1994 and have done only minor restoration and general maintenance in the last few years.

The car came complete with records detailing the total cost of restoration at £19,382 and six and half years labour at no charge! 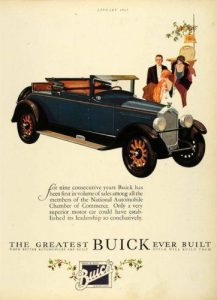 The Buick Motor Company was founded by David Dunbar Buick, who was born in Arbroath, Scotland and emigrated to America as a young man.  He formed the Buick Company in 1900 producing his first car in 1902.  The company prospered and bought other small motoring businesses and in 1908 became General Motors.

It was bought by Mr Tom Howard, a wealthy businessman from Queensland, Australia.  He ran it for many years covering well over a quarter of a million miles before abandoning it to his orchard in the 1950’s.

Somehow, the President of the Vintage Buick Club of Australia, Mr G Donker was informed of its whereabouts and bought it knowing it was one of only 68 manufactured and set about restoring it.

The restoration took almost seven years to complete.  After it’s completion in 1977 it made its debut at the Melbourne Motor Show.

For the technically minded it is a straight six-cylinder engine of 4.5 litre overhead valve with a bore and stroke of 3 3/8 x 4 ¾ inches.  That develops 75 bhp at 2850 rpm using a Marvel carburettor and delco ignition.  It has external contracting brakes on all four wheels and a Yale lock that locks the gearbox in neutral.

At the time of manufacture, Buick advertised their 6-cylinder engine as a sound piece of engineering known for its long life and relatively easy maintenance.  It claimed that all its cars were capable of maintaining speeds of 60 or 70 miles an hour without strain. 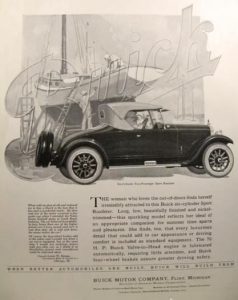 The Model 24-44 Roadster is finished in cobalt blue with black fenders and headlights.
A pretty little car, it attracted 9,700 buyers in America, but only 68 were manufactured with right hand drive for use in the UK.
Significantly less than that exist today.
Its cost was $1,275 and weighed 3,300 pounds.

The bumper, windwings and motometer were all additional accessories.

This was the first of the 4 wheel brake models – 4ltr developing 70 BHP.

The Buick 6-cylinder engine was a sound piece of engineering, known for its long life and relatively easy maintenance. In 1924, Buick claimed that all if its cars were capable of maintaining speeds of 60 to 70 miles per hour without strain.

This car has been used in a number of television and film productions.
Being a right hand drive model, this is an incredibly rare motor vehicle. If you know of another let us know.
[nivoslider id=”130″]